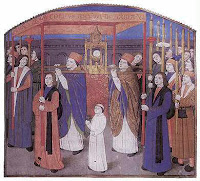 Worldly intelligence is not enough. Rationalism equated Reason with discursive, conceptual thought (ratio) – thought that is both “prosaic” and “mechanical”. All very well in its place. But there is another, rather vital kind of intelligence, which the medieval writers tended to call intellectus. “Intellect”, in this sense, refers to our capacity for the intuition of essences. The Intellect is not discursive, linear or mechanical. It makes leaps, it is “poetic”; it is the heart thinking (if by “heart” is understood the highest or most central element of the person, or the faculty in which body and soul are gathered to a unity). Intellect perceives the truth directly, rather than inferring or deducing it; and indeed it may never express that truth in words, for the deepest truth of an essence or of a being is not such that it can be fully captured by any verbal proposition. Intellect, then, perceives the truth directly; but normally in our human condition it does not do so without some kind of mediation or support, at least as a “trigger”; and this support for intellection is called the symbol.


Another distinction, comparable to that between Reason and Intellect, might be made between Fantasy and Imagination. One sees Fantasy at work in the modern media industry, where the manipulation of images fosters the fragmentation of consciousness and the arousal of desire. No wonder so many Church Fathers viewed it in purely negative terms, as leading to spiritual death. But the soul lives by the Imagination, if we may broaden this concept to include the whole process by which we integrate and order the contents of our consciousness, moment by moment. These contents ­– composed of various sensory impressions, memories and feelings – may be well or badly ordered. If ordered well, then the “meaning” of those experiences becomes apparent. In the case of symbols, this meaning is due to the intelligible light that shines through them, illuminating the rightly-ordered soul (that is, the soul possessed of a “pure heart”). It is this fusion of the light that comes from the spirit or Intellect with the materia of the soul that creates the symbol, and to “read” it as pregnant with meaning is an act of the Imagination.

Symbolism is the primary language in which God addresses us, and the necessary support for intellection. It is the symbolic which is the basis of the sacramental, when God takes a ritual form and fills it with his own presence: the symbol then becomes literally an extension of his Incarnation. A sacrament, then, is a set of symbols that God has chosen to use as a vehicle for the transmission of grace. The symbolism of bread and wine and water is not unrelated to the kind of grace that is transmitted by them, and its purpose. Grace builds on nature. This is why the Church’s neglect of the Imagination has been so catastrophic in recent times, and is closely linked to the collapse of effective catechesis in homes, parishes and schools. Only by the training of symbolic consciousness can the basis be established for a continued, living interest in the truths of faith and the possibility of spiritual progress.
Posted by Stratford Caldecott at 09:25