Theology of the body 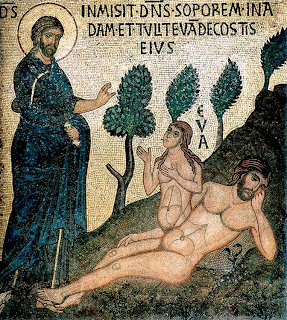 An old friend of mine (and long ago of Charles Williams), Lois Lang-Sims, recently said that “All these teachings about sex and about the sanctity of human life and the human body have their roots in metaphysics,” which, she added, is the last thing anyone these days wants to talk about. Pope John Paul II understood this and called for a renewal of metaphysics in his encyclical Fides et Ratio. The key to his Theology of the Body seems to me this:


“The body, in fact, and only the body, is capable of making visible what is invisible: the spiritual and the divine. It has been created to transfer into the visible reality of the world the mystery hidden from eternity in God, and thus to be a sign of it.” – John Paul II, 20 February 1980, General Audience

The same Pope talks about the “spousal” or “nuptial” meaning of the body, which he says is “not something merely conceptual” but concerns a “way of living the body” in its masculinity and femininity, an “inner dimension… that stands at the root of all facts that constitute man’s history”. This nuptial meaning has been limited, violated and deformed over time and by modern culture, until we have almost lost the power of “seeing” it, but it is still there to be discovered with the help of grace, like a spark deep within the human heart. The “language of the body”, therefore, must be recovered, and that is what the Pope seeks to do. But as he says, correctly reading this “language” results not so much in a set of statements as in a “way of living”.

Since I posted this item, a brilliant interview on the subject has appeared with Bishop Jean Lafitte. And if anyone wants to study the subject in depth, the best book-length introduction I know is Called to Love, by Anderson and Granados. I will return to this subject on another occasion.
Posted by Stratford Caldecott at 09:05 No comments:

Email ThisBlogThis!Share to TwitterShare to FacebookShare to Pinterest
Labels: metaphysics, Theology of the Body

The medieval mystics loved to meditate on the Virgin Mary as the “enclosed garden” or “walled garden” of the Song of Songs, and as the new “Garden of Eden”, Paradise restored. St Bernard of Clairvaux is frequently cited – as here, by St John Eudes in The Admirable Heart of Mary (Loreto Publications, 2004, 70):


Thou art an enclosed garden, O Mother of God, wherein we cull all kinds of flowers. Among them, we gaze with particular admiration on thy violets, thy lilies, and thy roses, which fill the House of God with their sweet fragrance. Thou art, O Mary, a violet of humility, a lily of chastity, and a rose of charity.”

In the original Garden, St John comments, man hid from God and God had to call for him. In the new Garden, the second Paradise, God hid himself and his glory for love, so that the three kings who came from afar had to ask, “Where is he?”

The tradition of the hortus conclusus is entwined with that of the Immaculate Conception, because just as Adam was made from the earth before the Fall, so it seemed eminently fitting that the second Adam should be made from a woman similarly untouched by sin. God was making a new beginning for the human race. In order to plant the new Tree of Life, he had to establish around it an enclosed garden, protected from the corruption of the world outside. That garden was Mary.

Posted by Stratford Caldecott at 09:51 No comments: 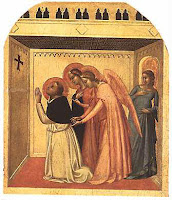 I think we are too quick to think in terms of rules in both the moral and spiritual life (which are really the same thing), without realizing what those rules really mean. There is a rule, for instance, about going to confession before receiving communion if we are in a state of serious sin, and lots of lists of what sins are "serious". But the point is surely that the spiritual effect of communion depends on the quality of our self-gift. When the priest prepares the offerings at the altar, we are attempting to join ourselves to those gifts, so that the self we give to God in them can given back to us transformed. In receiving communion we receive into ourselves not just the host, but Christ himself, and in him the new self that he is wanting us to become. But sin is always a form of attachment to the old self. Thus if we are in a state of sin before Mass we are in a state of attachment, of holding back part of ourselves from the gift - and this part of ourselves cannot be transformed. Going to confession is a way - the best way, sometimes the only way - of detaching ourselves from ourselves, so as to benefit from the Mass.
Posted by Stratford Caldecott at 19:26 No comments: