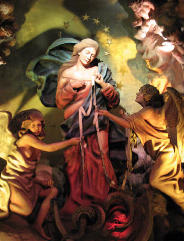 It is a 17th-century devotion that Jorge Mario Bergoglio discovered in Augsburg in 1986, a devotion to Our Lady the Untier of Knots – especially the "knots" of sin and twisted relationships that afflict families and destroy marriages. He brought it back to Argentina with him and promoted it there. The devotion is connected with the image of our Lady the Virgin of the Snows, which helps to explain his visit to Santa Maria Maggiore in his first day of office in Rome. CTS have published a book by Miguel Cuartero Samperi on this topic, and it is touched upon in this article from which the illustration was borrowed.

Cuarto writes: "The devotion to Mary Untier of Knots has been, since its origin, closely connected to marriage and the family, as it was to save the indissoluble bond between two spouses that the Virgin Mary desired to manifest her closeness and the efficacy of her intercession. Mary Untier of Knots is therefore invoked above all for family problems: marital crises, incomprehension, infidelity, separations and divisions between spouses, problems of every kind with the children, disputes between siblings, risky pregnancies, violence in the family, illnesses, work problems and other kinds of difficult situations that, like small and large knots to be untied, make family life a cluster of tangles."

Posted by Stratford Caldecott at 10:55 No comments: 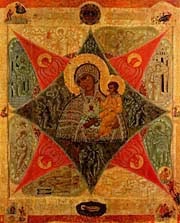 Descartes sought for an indisputable first principle on which to base his philosophy, and concluded that “the proposition, I am, I exist, is necessarily true whenever it is put forward by me or conceived in my mind.” I think therefore I am. But where does the “I” come from, and to what does it refer? Thinking is certainly taking place, but all that is proven here is that thinking exists.

The foundation of thought is not “I am”—that is too specific, too hasty—but “something is” or “being is”. Being is that in which there can as yet be no distinction between what it is and the fact that it is—essence and existence. It is that whose nature is to exist. Everything else exists against the background of that necessity, a Presence or Principle which contains every possibility. And all human knowledge is rooted in the intuitive apprehension of being through a
Read more »
Posted by Stratford Caldecott at 23:17 No comments:

A new way of reading 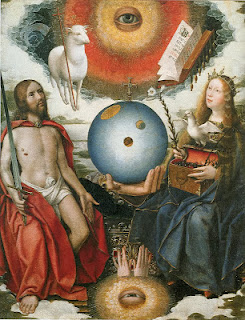 The Radiance of Being draws upon an eclectic range of sources, not just authorities respected by Catholics and Orthodox. I tried to demonstrate in the book a new way of reading. Most orthodox writers try to defend Catholic truth by exposing the limitations and contradictions in heretical or marginal writers. I feel we should look for whatever may be true in those marginal writers and locate a place for it within the bigger system. Quite often the obstacle to understanding and appreciating them is our assumption that they are writing rationally, when they are writing imaginatively.

The Inklings did a great job vindicating mythopoesis. They believed that truth can be expressed imaginatively, poetically, mythologically. Can we apply this insight to these marginal theological writers and mystics? To do so we must be able to appreciate the voice of the imagination.

This does not mean accepting it as authoritative. Quite often the imagination addresses us with a magisterial tone, as if to say, "I have seen this for myself: therefore it is true." The Gnostics provide a handy example of what I mean, and 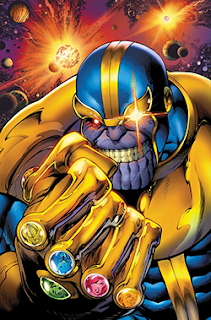 Watching the news, reading the papers, even the most sheltered of us may come to believe in the existence of real evil – of people who consciously and consistently reject God. The comic-book super-villain (such as Thanos, the arch-enemy of the Avengers, shown in this picture) is a symbol of such types. In real life, when the unrepentant sinner comes to die, what justice will he find? Eternal torment? And if so, will the punishment be made to fit the crime, as in the myths of old and Dante's Inferno? No one can deny that such an outcome seems appropriate. But why must this torment go on for ever, as it does in Christian doctrine, following a literal interpretation of Scripture (Matthew 25:46; Rev. 14:11). Why will a merciful God not not simply annihilate those who reject him?

The answer seems to be that he cannot. Even the Omnipotent cannot do what is by definition impossible. What makes this difficult to see is the meaning of time and its relation to eternity. To live even for a day is to exist eternally. That is to

Read more »
Posted by Stratford Caldecott at 07:51 No comments: 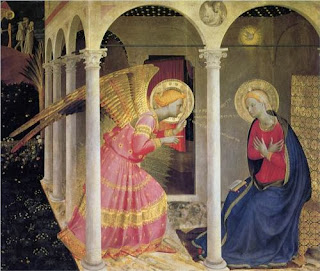 Caussade seeks "a free and active co-operation which is, at the same time, infused and mystical". It is an active co-operation because a merely passive one would leave the human person unchanged and imperfect, unrepentant and unhappy. For Caussade, God loves the human person and brings us to perfection through grace, with which we must cooperate perfectly by the time we reach

Lectio with the Psalms 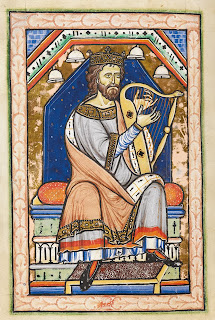 I am more and more drawn to the Psalms, and to reading them slowly, using the method of Lectio Divina. At the heart of the Bible, they reflect the whole of Scripture in the form of prayer to God. Part of the Wisdom Books that divide the Historical Books from the Prophets, they form a vital stage in the movement from the first Covenant to the last, that of Jesus.

The Pentateuch or five Books of Moses open the Bible with the first Covenant – the creation itself, then Noah, Abraham, Moses. Then the Historical Books trace the Covenant through David and his descendants, through the emergence of Israel. Then the Wisdom Books reveal the meaning, the inner meaning, of this unfolding Covenant, to the individual soul as well as the People of God. The Book of Job flattens the soul on its face before

I Am Therefore What? 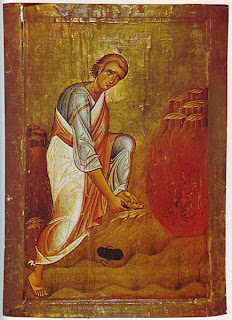 For Descartes, the very fact that I am thinking – or that I can doubt that I am thinking – is proof of my existence, and for Augustine, too, fallor, sum ("If I am mistaken, I am") (XI, 26). But the relationship between consciousness (thought) and being (existence) goes much deeper, as we read in the Book of Exodus, when Moses is told that God’s proper name is “I AM”. “This is what you must say to the sons of Israel: ‘I AM has sent me to you’” (Exodus 3:14). This sacred name of God then echoes throughout the Old Testament (YHVH) and the New (ego eimi). In John 8:58, Jesus tells the Jews, “Before Abraham was, I am.”

The Name is sacred and unpronounceable because it is a name that only God himself can utter, since he is the Self in question. Anyone who is not the “I” to which the Name refers is usurping the Name. And so the Name is not merely a label attached to one person by another, but an expression of who God is. It is the self-expression of God, the beginning of the revelation that becomes 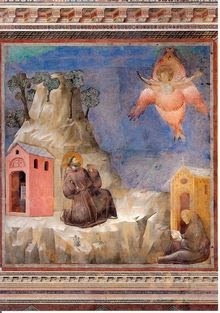 It is easy to speculate about the purpose of suffering when one is feeling well, but in the midst of pain most of us find speculation impossible.  And yet as Elisabeth Leseur says (in the February 2014 issue of Magnificat), "Suffering is the great law of the spiritual world. God’s chosen ones escape it less than others; they pay the ransom for others, sometimes at a very high price. We will know only later the work accomplished by our suffering and our sacrifices. It all goes to the heart of God, and there, joined to the redemptive treasure, it expands in souls in the form of grace. We can convert, sanctify, console without going out of our home or out of ourselves."

Suffering is often the "price" we pay in advance for a grace that will come later. If that seems crude, remember that the law of exchange, justice, and balance is rooted in the very depths of divine justice. Not everything can be mercy. The pattern is established on the Cross, where our suffering is not merely imaged, but incorporated and integrated. The Cross is both Mercy and Justice. It is Justice because sin has destroyed order, and the restoration of order requires nothing less than the sacrifice of a perfect man, a sacrifice that makes up for everything that had been lost. It is Mercy, because the perfect man is also God, and therefore the payment does not merely make up what was lost, but infinitely more. Mercy is the gift of God's own self, his love. "It is love which not only creates the good but also grants participation in the very life of God: Father, Son and Holy Spirit. For he who loves desires to give himself" (Dives in Misericordia, n. 7). Thus the balance between Mercy and Justice is established on the basis of the Hypostatic Union, the union of divine and human natures.

If we must learn to die to our false self to live in Christ, then suffering is the best way. The old self wants anything but suffering and pain. The new self, the true self, wants only the will of God.

Illustration: St Francis receives the Stigmata of Christ, by Giotto.

Posted by Stratford Caldecott at 08:53 No comments: