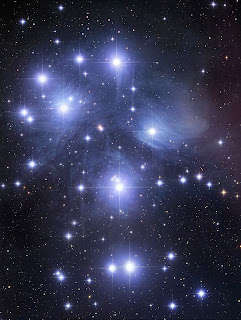 The Cross is everywhere. The symbol of Christianity was based on a Roman instrument of torture, but the geometry of the Cross is so simple and universal that it speaks to everyone.

The figure of a human being with arms outstretched conjures the idea that the human person is the expression and reflection of the whole world – a microcosm. The cosmos is marked with a cross. The two lines meeting at right angles are the simplest way to locate a point, to fix a coordinate. The two dimensions of the plane surface receive from the cross a central point, or emanate from it. Stand it vertically and it represents the intersection of our reality with the hierarchy of others above and below us.

All of this is going on when Christ carries the wood of the Cross to Calvary, where it is assembled and raised up to make the paradoxical throne from which he reigns in the midst of our darkness and pain. With him upon it, and his blood running down it, this simple wooden gibbet becomes the Tree of Life that ends our exile from Eden’s garden.

But we have to go through it, as one might go through a doorway. Christ dies on the Cross not so that we don’t have to, but so that he can be with us when we die. Because he dies like us, we don’t have to let go of his hand in death – or if we do he will hold us, to bring us back to life. He accompanies us, goes ahead of us, follows us, to rescue us. Death is a baptism; it is an Epiphany. The blood and water that pours from the Lord’s side into the chalice of the world is the sacred river of life, the river that runs through the heavenly city in the Book of Revelation.

The Pleiades, shown here, are the seven daughters of the Titan Atlas, changed into stars by Zeus. The idea of making people immortal by changing them into stars is a powerful one. There is a sense in which our destiny lies in the heavens, and these bright points of light, shining so far above this vale of tears, represent something we aspire to, but can only become if we are touched and elevated by divine grace. The Cross, where heaven and earth meet, is the sign of that contact and elevation.
Posted by Stratford Caldecott at 11:16 1 comment:

Since All Things Made New is largely on this topic, I'll just mention that the Pope gave some interesting talks on Prayer in the Book of Revelation at his General Audience earlier in September. Here is Part One, and Part Two.
Posted by Stratford Caldecott at 11:07 No comments: 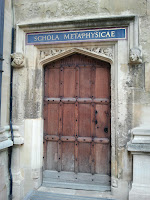 What is it about doorways that fascinates people? It isn't too hard to work it out. Everything that exists is in some degree a symbol, a message, a word. It speaks of something else. Poetry brings out and capitalizes upon that eloquence of things, that magical web of analogy. Jacques Maritain's book Creative Intuition in Art and Poetry is all about that. A doorway is a particularly potent symbol, because it represents the transition between two places, or two states of being. (I find it surprising there is not more about doors in Rene Guenon's Symbols of Sacred Science.) 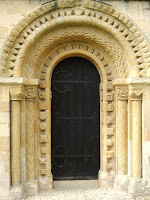 A closed door confronts us with mystery, a locked door with a secret. A door is designed for a human being to pass through, so the change of state or the mystery is something pertaining to the person as a whole. Doorways humanize a building by showing the point of entry, accommodating the building to the human form and to human use. Traditionally they are decorated and framed and embellished in ways that emphasize their symbolic function – steps leading up to the threshold, an arch or frieze above, pillars or statues on either side, these are not merely functional, or rather they refer to the symbolic and spiritual function of the door, which is to lead us towards our destiny. Death is a doorway; so is the birth canal. We may guess what lies on the other side, but we won't know for sure until we pass through.

Illustrations show the old door to the School of Metaphysics at the Bodleian Library, and the Romanesque entrance to St Mary's Church in Iffley, near Oxford. For more doors see here.
Posted by Stratford Caldecott at 17:15 2 comments: