Here is a wonderful meditation for Ash Wednesday from Magnificat, which offers daily spiritual reading, Mass texts and other spiritual resources for every day of the year. It is from the Venerable Louis of Granada OP.


'It is necessary to mention here a great deception that often befalls those who begin to serve God. Sometimes they read in spiritual

Read more »
Posted by Stratford Caldecott at 12:20 No comments: 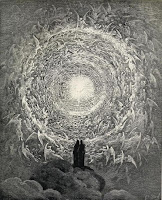 Balthasar’s “fourfold distinction” is his way of affirming a fundamental dualism in reality that is resolved in the Trinity. It is elaborated in the final part of Glory of the Lord, Vol. 5, and is regarded as the heart of his contribution to metaphysics. I am grateful to Adrian Walker for helping me to improve the following exposition, which has ended up being as much his work as mine.

1. The first distinction is the polarity I discover between "self" and "other" as I become aware of my own existence in relationship to other human beings, such as my mother leaning over me in the cradle. This is the discovery of the self and the other as mutual gift.

2. This matures into an awareness of a distinction between the multitude of existents (myself and all others) and the inexhaustible Unity we all belong to, on which we are dependent, which could be called Being. This is the second distinction, the distinction of existents (essentia) from Being (esse). It is the discovery of Being as gift.

3. But if we stayed at this second level, we might conclude that all things are a sort of inevitable unfolding or mechanical self-expression of Being or Spirit (monism, pantheism, idealism). That still leaves actuality itself, along with our sense of Being as gift, unaccounted for. Neither Being (esse) nor existents (essentia) are absolutely prior with respect to the other: existents need Being in order to be, but Being also needs existents to receive it. This is the third distinction, by which we recognize not only that existents depend upon Being, but also that Being depends on existents (polarity, co-dependency).

4. Since Being and existents both differ from and depend upon each other, together they point beyond themselves to something higher or deeper. We find we have to distinguish between the "Being of the world" and the pure Act that makes things exist. Worldly existence (the dual unity of esse and essentia) must be grounded in a necessarily existent Act, pure "is-ness" whose essence is "to be" and which therefore cannot not be. Thus the fourth distinction is between worldly existence and God (also named "subsistent esse", "Beyond-Being", actus purus, or "the Good").

But doing justice to this fourth distinction requires, even philosophically, a notion of creation as distinct from mere emanation. The ground of everything is pure freedom. Thus the distinction is really between God as creator and the World as created – the discovery of the Giver of the gift. Indeed, in the light of revelation, Christ manifests this unconditioned existence of pure Act (equivalent in Hindu philosophy to Nirguna Brahman) as gratuitous, self-giving love (Trinity).

Commenting on the fourth distinction, Balthasar writes: "This mystery of the streaming self-illumination of Being, which was glimpsed by Plato and Plotinus and which alone explains the possibility of a world (that is, the paradoxical existence 'alongside' Infinite Being which fills all things and which stands in need of none), attains its transparency only when, from the sphere of the biblical revelation, absolute freedom (as the spirituality and personality of God) shines in" (Glory of the Lord, V, 626).

He goes on: "God is the Wholly Other only as the Non-Aliud, the Not-Other (Nicolas of Cusa): as He who covers all finite entities with the one mantle of his indivisible Being in so far as they are able to participate in his reality at an infinite remove – as 'entities', which are not Him, but which owe their possibility to his power, and their wealth (to grasp Him as the One who is actual and to shelter in Him) to his creative freedom."

Posted by Stratford Caldecott at 18:44 No comments: 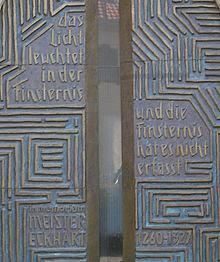 One of the perennial philosophical questions is the relationship of the One and the Many, God and the World. Although the question is inexhaustible, it comes down in the end to God and myself – for I am both one in myself and other than God: does that make God and myself part of a "many" that includes us both, or is this an illusion of separateness to be dispelled by mystical experience?

The mystics tell us that rest and happiness, for the soul and for the creature, "is to be found nowhere but in the one, indivisible unity that is God.... When all that goes to make up a man’s being has become lovingly one with God, then all the soul’s cries are hushed, and the unrest of longing and of acting has ceased" (John Tauler, cited in Magnificat, 8 June 2011). But self-forgetfulness in God is one thing. Does it really mean that the self ceases to "exist" at all – or even that it never existed? That would appear to be the message of Advaita Vedanta and the great sufi Ibn Arabi, and even at times the Dominican Meister Eckhart. But it is a misleading oversimplification, certainly in the case of Eckhart, maybe in the other cases too (see article).

Is Christianity "dualistic"? Philosophers such as Arthur Lovejoy and Robert Bolton would say so, though not in the sense either of extreme Cartesianism (mind-body) or Manichaeism (good vs evil). Christianity is dualistic in that it teaches that God created the world, and that the world is other than God, possessing (received) being of its own. The infinity of the divine Principle means it can create lesser realities without any diminution of or addition to its own substance – and those lesser realities are indeed real: they may be infinitely less than the infinite, but they are infinitely more than nothing. The being of creatures is freely willed in the groundless abyss of the Godhead. That "abyss" or ungrund where the Son is eternally begotten (and us with him in the "ground of the soul") is the source of all freedom, even man's.

This post has been by way of a footnote to the second chapter of All Things Made New. The image, from Wikimedia Commons, shows the Eckhart Portal of the Erfurt church.
Posted by Stratford Caldecott at 14:45 3 comments: 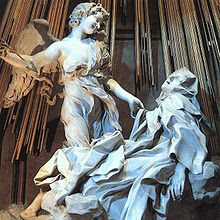 On 10 February, the following appeared as part of the meditation for the day in Magnificat. It is by the great Thomist and spiritual writer, Dom Anscar Vonier, the Abbot of Buckfast between the wars.

"There is only one end for man, and that end is not to be found within himself. Man’s end, man’s purpose is God, something outside himself which is greater than himself. It would be false Christian spirituality to say that the end of man is his own perfection. That is not the end of man. Man’s perfection is not in himself, nor can it ever be in himself. Man’s perfection is in God, in incorporation in Christ, and, through Christ, in God. All your virtues and all your piety, so to speak, would remain unfinished and incomplete if you were not raised above yourself to God."

One of the biggest, most important, but at the same time most obscure quarrels in modern theology rages around the correct interpretation of the "natural desire for God" – the idea that our hearts are restless till they rest in God (St Augustine). In fact St Thomas taught that all our desires, even for limited ends such as wealth or sexual pleasure or fame, can only be perfectly fulfilled in God and so imply a

Read more »
Posted by Stratford Caldecott at 17:34 No comments:

More on Mary and John 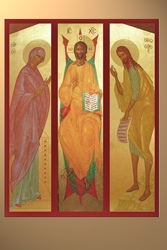 In an earlier post I wrote about the dynamic that explains the structure of the book, All Things Made New, which is the relationship between Mary and John at the foot of the Cross. Another aspect of this relationship is brought out in the meditation found in Magnificat for 4 February 2012, by Fr Marie-Dominique Philippe OP, where he says:

We think about the importance of his Mother's presence at the foot of the Cross for Jesus himself, but not so often about the importance of Mary's presence for John. She accompanied him there, and he accompanied her – both no doubt being a comfort to the other, and both witnessing the "hour of glory", not alone but together. Afterwards John made a "place" for her in his home, but she had already become the "place" for him to rest in contemplation of the Saviour, just as she had offered her maternal arms to embrace every Christian disciple – the new "mother of all that live", the new Eve, by virtue of the Holy Spirit dwelling within her.

Posted by Stratford Caldecott at 11:06 2 comments:

Email ThisBlogThis!Share to TwitterShare to FacebookShare to Pinterest
Labels: Mary and John

The publisher of All Things Made New is now online here.
Posted by Stratford Caldecott at 18:43 No comments: