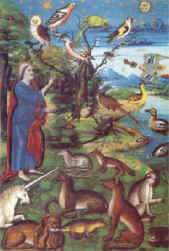 Madeleine L'Engle wrote a sequel to her award-winning story, A Wrinkle in Time, called A Wind in the Door. It is mainly about the power and importance of Naming (a topic I explore in Beauty in the Word in the chapter on Grammar/ Remembering). In L'Engle's story, the universe is threatened with nothingness by the fallen angels, and the only way to save it is by Naming things and people back into reality – and you can only Name things if you love them.

When something is named we say that it is "called" such-and-such. Would that we paid more attention to the implication of the word! To call is not just to attach a label to something, but to summon it, to invite it. This is an echo of the primordial act of creation, when God calls things out of nothingness by appointing them a place in the cosmos.

Interesting, too, in the first Genesis account of creation, that God creates each living creature "according to its kind". I would like to know more about the Hebrew word translated here as "kind". it seems to me that it must refer to the archetypes of each species, which are forms in God's mind (although a friend assures me that the Septuagint translation gives no hint of this). These forms are causes, but not the kind of cause that science searches for. Archetypal causes are what a thing is supposed to become, or why it exists – the thing it is called to be. (There is an intimate relationship between formal and final cause.)

Of course, it is true that the meanings of words are determined in large part by (as the Oxford philosopher would say) their "use" in the language. We learn words by associating them with the context and the way they are used in our hearing, and they accumulate further associations and connotations as we move through life. Nevertheless there is a faculty of "naming" by which we identify the essence of a thing, and that is evident in poetry and myth. It is the "use" of words according to our own highest nature and purpose – as Adam named the animals. In my book I call it the "first human task".
Posted by Stratford Caldecott at 08:44 No comments: 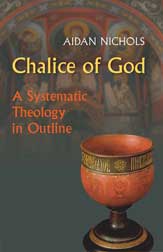 A new book by Fr Aidan Nichols is liable to be overlooked because he writes so many, but all are worthwhile, and this one is a kind of theological manifesto, a summary of his metaphysical and theological vision for the renewal of the Church. He explains that it is intended to offer "a fresh approach to the Catholic understanding of the world and human existence in revelation’s light." It ends with words that show where it has been leading us all along: "It is in letting the soul, the microcosm, and the world, the macrocosm, be the receptacle for all the generosity the Trinity pours forth that the Chalice of God fills to the brim." You can read a review here and a sample here. Fr Nichols has written an introduction to the book here.
Posted by Stratford Caldecott at 09:48 1 comment: 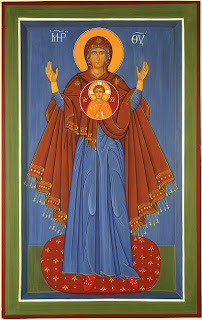 In All Things Made New, I write in detail about the Lord's Prayer and the Rosary, but not the "Jesus Prayer", which is an equally profound expression of Christian spirituality. The prayer is a form of rhythmic invocation using the divine name "Jesus" – at its simplest, the phrase "Lord Jesus Christ, have mercy on me," or in expanded form, "Lord Jesus Christ, Son of the living God, have mercy on me a sinner." Dmitru Staniloe, in his wonderful book Orthodox Spirituality, writes that one may first try to synchronize the words of the prayer with the beats of one's heart, and then – when that rhythm has become established – with a slow inbreath and outbreath ("Lord Jesus Christ" on the inbreath). But if the prayer consisted only of habitual repetition it could become mechanical. This is not the object, for the emphasis must be not on the words but on the "thought of each word" – the repetition of meanings, until "the heart cannot beat without the mind seeing Him" and one can understand the language of all God's creatures as they pray to Him each in their own way.

Icon of Our Lady of the Sign by Solrunn Nes.