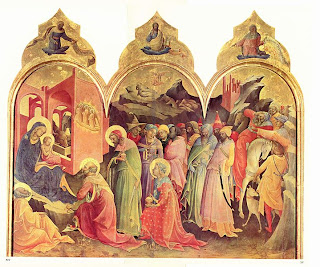 The poet Coventry Patmore once wrote of the Incarnation that it is not merely an event which occurred two thousand years ago, but one that is "renewed in the body of every one who is in the way to the fulfilment of his original destiny" (RRF, "Homo", XIX). In the birth of Christ the revelation of that destiny begins, because the One who is born is the new Adam, the new archetype of humanity. It is like an opening at the centre of the world, just when it seemed that there was no escape. In that opening is a space wider than the world, in which all the possibilities of life and love are set free. Our own humanity is reborn in his, our light rekindled. The beauty that will save us opens his arms to us, and shows us his face.

The Adoration of the Magi, by Lorenzo Monaco, c. 1425.
Posted by Stratford Caldecott at 17:39 No comments: 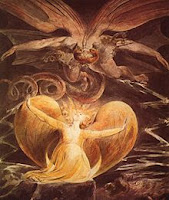 Much recent scholarship suggests that the Book of Revelation (literally ‘unveiling’) was intended not so much as a prediction of future events at the end of history, but as a mystagogical commentary on the Divine Liturgy or the Mass. As such it was intended to be read aloud to assist the active and conscious participation of the congregation. Scott Hahn gives a detailed liturgical reading to Revelation in The Lamb’s Supper, and more succinctly in the final chapter of his book on the history of the Covenant, A Father Who Keeps His Promises. Austin Farrer had already indicated in the middle of the last century that the pattern of the book is not one of earthly history,


but of celestial liturgy performed by Christ and the angels: the taking and unsealing of a book, the offering of incense, the blowing of trumpets; the opening of a heavenly temple, revealing the Ark of the Covenant and a series of other portents on high; the pouring of libations from angelic bowls. (The Revelation of St John the Divine, p. 23.)

The liturgy portrayed is one that fulfils the purpose of the Jewish Temple and brings it to an end, so that ‘in the world to come there is no sanctuary other than the presence of God and of the Lamb.’

The rhetorical symmetry of the Book of Revelation does seem to reflect the likely structure of the early Christian liturgy. The pattern is threefold: beginning with a rite of preparation and repentance that opens the faithful to the Word, moving on to an exposition of the Scriptures, and ending with a Communion in the Body and Blood of the Lamb, by which the Christian is finally converted into a prophet and agent of his Lord. Then the threefold pattern reverses, and we are taken back to the beginning. Read in this way, the Book of Revelation is intended to have a spiral structure that leads us up to the Eucharist, then back at a higher level to the beginning of the liturgy. Thus an endless cycle of meditation is created, penetrating ever more profoundly into the Word of God and leading us closer to the liturgy of heaven.

I have explored this idea in All Things Made New, and in an article on the New Liturgical Movement website. If it is true, then Revelation makes a fitting conclusion to the Bible, echoing the Book of Genesis with its own sevenfold theme, and providing a key to the reading of the Liturgy that unites heaven with earth as the culmination of the history of the Covenant. Whether it also reflects disasters that will afflict us at the end of time as Judgement draws near is another question.
Posted by Stratford Caldecott at 12:38 No comments: