Secret of the blackberry 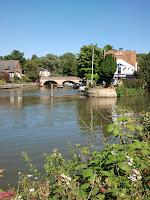 This is the nearby riverside where I pick blackberries. The river is the Thames running through Oxford, where we call it "Isis", a name redolent of ancient mystery. But the blackberry has mysteries of its own.

In long-ago days my brother and I would climb the fence and reach into our neighbour's garden for the fat blackberries that grew there, which (I suppose we imagined) she had no use for. Sometimes we would even venture to place a foot to the ground, thus technically trespassing in her little paradise with its round brick-walled pond containing huge goldfish, under the spreading pear trees that, as in our garden, were the remains of an ancient orchard, and which in springtime became towering clouds of white blossom.

The blackberry is bold. Amongst all the other flowers and fruit competing for attention with a riot of colour, she does the opposite and decides to be completely black. (Ironically the old lady who lived next door was a Mrs DuSoir.) Making herself black by absorbing all the colours of the rainbow, she transmutes them within herself and gives them back to us in the form of flavour. A flavour that for me, like that of fresh strawberries or peas raw from the pod, evokes the wonder of being a child in a world that has been newly made and beckons to be explored. It is a flavour, now, that heals and consoles. And the danger of the prickles does nothing but make it more enticing. The blackberry cannot be taken easily but must be won, at great personal risk. 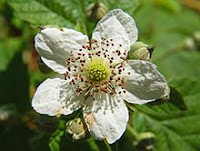 There are sacred numbers at play in the blackberry. The leaflets number five, seven, or three; the petals five. (Pythagoras would get my drift.) But then, there are sacred numbers everywhere in nature – they are just the way she works. Any yet the blackberry is despised, for growing, all too quickly, by the roadside and in gardens where she is not wanted – gardens where the gardener thinks all must be soft and gentle to the touch. The blackberry is by her nature wild, and therefore she is a revelation of nature's heart, of Sophia, of the beauty that calls to us from the end of the world.