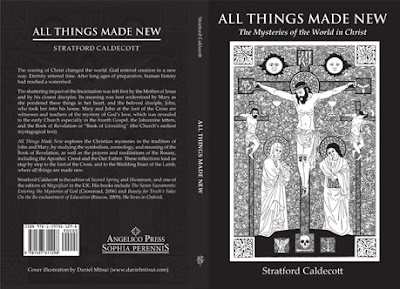 This is the book after which this blog is named. You can order it from Amazon US, or Amazon UK, or through your local bookshop, or the publisher. ISBN: 978-1-59731-129-8. The spectacular cover art is by Daniel Mitsui. (Go to his web-site for a detailed view.) Review copies of All Things Made New can be requested from the publisher at Angelico Press, John Riess (jriess718@gmail.com).

All Things Made New explores the Christian mysteries by studying the symbolism, cosmology, and meaning firstly of the Book of Revelation (reading this as a prophetic and mystical commentary on the Divine Liturgy rather than a set of predictions) and secondly of the prayers and meditations of the Rosary, including the Apostles’ Creed and the Our Father.

Why put these together in one book? The shattering impact of the Incarnation was felt first by the Mother of Jesus and by his closest disciples. Its meaning was best understood by Mary as she pondered these things in her heart, and the beloved disciple, John, who took her into his home. Mary and John at the foot of the Cross, depicted on the cover by Daniel Mitsui, are witnesses and teachers of the mystery of God’s love. So the book attempts to explore the Christian Mysteries as much as possible "through the eyes" on John and Mary, with the help of the Book of Revelation and the Rosary.

I have run a series of posts discussing aspects and themes of the book that may be of interest to potential readers. The series runs in order as follows: Mystagogy, John and Mary, The Unveiling, How to read the Bible, Mysteries of the Rosary, How "Made New"? The series then continues through November and December 2011.

Readers interested in Mystagogy might like to know that All Things Made New forms a sequel to The Seven Sacraments: Entering the Mysteries of God. That earlier book, in turn, has been thoroughly revised, and will be republished in a new edition by Crossroad in due course.

To go to the Home Page of this blog click here or on the main title bar above.
Posted by Stratford Caldecott at 03:53