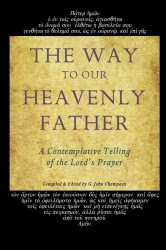 In my new book (see below) I include a commentary on the Lord’s Prayer, and in The Seven Sacraments (on the right) I tried to show how the seven petitions of the Prayer correspond to other patterns of seven in the Christian tradition, and to the needs of the human heart. But there is always more to say about this Prayer, so deceptively simple and yet profound. One of the most fascinating and richest expositions I have ever seen is G. John Champoux’s The Way to Our Heavenly Father, which shows how the whole of Scripture and all the spiritual teachings of the Fathers can be organized and correlated with the various parts of the Prayer, as though before our eyes the entire Christian revelation was flowering and refolding back into the one Prayer. The collection consists not of detailed commentary (although there are
wonderful commentary sections) but mainly of extended quotations from Scripture and the Eastern Orthodox Fathers arranged to help open the spiritual eye of the heart. The Commandments, the Liturgy, the Gospels, the Apocalypse, and the Psalms are formed into “verbal icons” of extraordinary intensity and luminescence. The book may be one of the great spiritual achievements of our time. It is a book to pray with, a page at a time.

The beginning of the Prayer itself is implictly Trinitarian. “Our Father, who art in heaven,” anchors it in the Father, to whom it is addressed. “Hallowed be thy name,” refers to the Son, who is the name or icon of God for man, the one who names the Father “Abba” and whose own existence is reciprocal with that of the Father, since there is no fatherhood without filiation, without generation. “Thy Kingdom come” is about the Holy Spirit, through whom the presence of the Father and Son are breathed into the world, and “Thy will be done on earth as it is in heaven” is actually accomplished.

After that, the Prayer asks of this Trinitarian God the four things we need above all else: the Bread to sustain eternal life, the forgiveness to be able to receive this Bread (which is conditional on our readiness to forgive others), defence against temptation on the way to eternal life, and final deliverance from all evil.
Posted by Stratford Caldecott at 10:26

Email ThisBlogThis!Share to TwitterShare to FacebookShare to Pinterest
Labels: prayer