Seeking the face of God 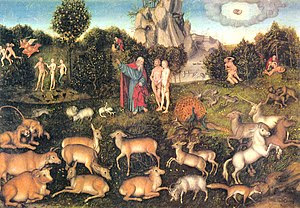 The Genesis account of the Creation and Fall, poetic and metaphysical, takes place in an archetypal landscape that lies behind our world and shapes it from within. In that sense, while we are conscious of the state of fallen nature, into which we have been exiled – it is evident in the facts of death and suffering and the weakness of our will – the archetypal landscape of Genesis is not entirely inaccessible. Chesterton speculated that the garden of Eden lies all around us still, only our eyes have changed so we cannot see it. There are some of the English mystics who have "cleansed their eyes" and seen paradise: Thomas Traherne, William Blake, and Samuel Palmer were among them. Traherne wrote: "Your enjoyment of the world is never right, till every morning you awake
in heaven; see yourself in your Father's Palace... clothed with the heavens, and crowned with the stars." In The Marriage of Heaven and Hell Blake wrote: “If the doors of perception were cleansed every thing would appear to man as it is, Infinite. For man has closed himself up, till he sees all things thro' narrow chinks of his cavern.”

Even fallen nature is created by God and reflective of his nature. So a Monk of Most Holy Trinity Monastery writes on our web site:


"It is not merely by convention that the night sky reflects God's immensity and majesty. Creatures... not only signify the thoughts of God the way words do; they express and make visible what is hidden within God the way a face expresses what is within the person. The expressions on a face are natural signs containing in themselves a sensible likeness of the movements of the soul. A baby understands in a mysteriously direct and untutored way the facial expressions of its mother. Creation, then, is not only the book of God, it is the face of God. And man's contemplation of God through the creation is meant not only to be a deductive interpretation of symbols, but also an intuitive penetration of the personal mystery of God in the face of creation."

Living in the state of exile from God's presence, the Psalmist prays, "You have said, 'Seek my face.' My heart says to you, 'Your face, Lord, do I seek.' Hide not your face from me" (26[27]:8-9). With the Covenant, already the state of friendship with God has begun to be restored. Moses speaks to God "face to face" and his own face is full of light. When Jesus comes, who is the Face of God, his whole body is transfigured on the mountain. The divine countenance is uncovered to the eyes of faith. "No one has ever seen God; the only begotten Son, who is in the bosom of the Father, he has made him known" (Jn 1:18). "He who has seen me has seen the Father" (Jn 14:9). Now through the grace of Christ all of us can find ourselves in the presence of God, face to face in paradise.

Posted by Stratford Caldecott at 06:00