Mysteries of the Rosary 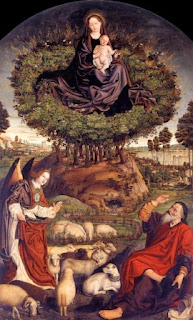 The second half of All Things Made New reflects on the mysteries of Christ through the eyes of Mary, and borrows its structure from the prayers and meditations of the Holy Rosary: that is, from the Creed which affirms the whole apostolic faith of the Church (traditionally understood to be composed of twelve parts corresponding to the twelve Apostles), the Lord's Prayer, the Hail Mary, the Glory Be, and the Way of the Cross (an expansion of the Sorrowful Mysteries). Whether or not, as legend has it, the Rosary was revealed to St Dominic by Our Lady herself in a vision from heaven, it certainly reflects and evokes a "Marian spirit" of prayer, which is the inner attitude of wonder, gratitude, awe, and love – of seeking to know and to do the will of God "on earth as it is in heaven" and in every moment. Mary is a bridge between earth and heaven, an immaculate or heavenly garden while on earth, raised to heaven in her body as the beginning of the new creation in her Son.

The Rosary is a very "metaphysical" prayer. Mary is like the primordial waters lying open before the life-giving action of God at the beginning of the world. By praying we are trying to become like her, receptive to the will of God. Mary’s fiat ("Let it be to me according to your word") echoes God’s fiat ("Let there be light") in the very beginning of creation, and her Son’s fiat ("Let not my will but thine be done") in the Garden of Gethsemane (Luke 22: 42).

The five Joyful, five Sorrowful and five Glorious mysteries describe the life of human childhood, the adult life and the supernatural life. Taken as applying to the individual soul they describe, first, the life of the soul as it opens itself to grace, second as it struggles to follow Christ, and finally as it experiences the transformation wrought by grace. Blessed John Paul II introduced a further set of five "Luminous" mysteries to be prayed between the Joyful and the Sorrowful. These summarize Christ’s public ministry between his Baptism and his Passion (the Baptism in the Jordan, the Miracle at Cana, the Preaching of the Kingdom, the Transfiguration, and the Eucharist).

Ancient and medieval thinkers found symbolic significance in numerical patterns. The Apostles’ Creed through which one enters the Rosary has twelve sections, like the gates of the New Jerusalem. The Lord’s Prayer which begins each sequence has seven, like the seven sacraments or the seven days of creation. The Glory Be with which each sequence ends is Trinitarian. Each sequence of beads is made up of ten Hail Marys, ten being the sum of seven and three, itself symbolic of the expansion of the totality of numbers contained in One. A Rosary contains five mysteries, five being the number of life and growth, found especially in flowers and leaves. (Five is also closely related to the Golden Ratio and thus to many aspects of beauty in nature.)

By the addition of the five Luminous Mysteries, bringing the number of rosaries to four, Pope John Paul II seems to have brought the ancient tradition to its completion. The fourfold structure of the Mysteries recalls the fourfold Gospels, and each of the four sets of Mysteries corresponds to one of the Gospels in a special way. The Joyful Mysteries correspond to the Gospel of Matthew, whose symbol is a Man and who emphasizes the titles “Son of Man”, “Son of Abraham”, “Son of David”. The Sorrowful correspond to Luke, whose symbol is the Ox and whose Gospel emphasizes the role of Jesus as sacrificial victim. The Luminous would then correspond with Mark, whose symbol is the Lion, and who proclaims the divine power of the Lord. Finally the Glorious Mysteries can be associated with John, whose symbol is the Eagle, and who teaches us the most about the intimate relationship between the Son and his heavenly Father.
Posted by Stratford Caldecott at 12:44